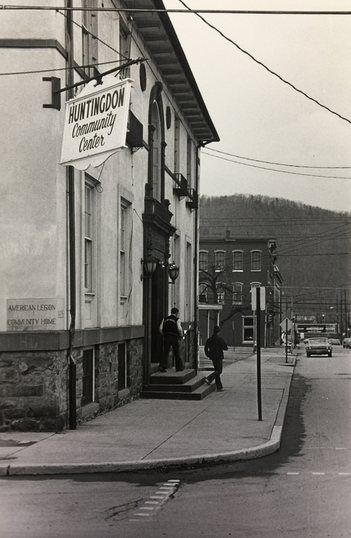 The Huntingdon Community Center was erected in 1925 by the American Legion and was financed through contributions and pledges from individuals, civil and service organizations, and business firms. The Legionnaires worked very hard under the leadership of commander E.J. Williams. They held several festivals and contests and actually dug the foundation themselves. Two main features of the completed structure were the bowling alleys and swimming pool. It is reported that one individual was killed while working on the structure volunteering his time.
The facilities were initially used by veterans as a transient station. Huntingdon High School played their home basketball games at the center until the Portland Avenue Complex was constructed. It is interesting to note that at one time, the Community Center basketball court was the largest in the Mountain League.

The national economic situation in the early 1930’s made maintenance of the large building a tremendous burden to the American legion. The pool remained open only about four years and it has never been reopened. In 1938 the Pennsylvania department of public assistance rented a large portion of the building and the gymnasium was rented for special community events. By this time the American Legion Home Association moved to its present location on Washington Street.

April 1949, the Huntingdon Ministerium held a meeting which in addition to its members was attended by 55 other community minded persons to discuss a youth recreation program. At that time it had recently been advertised that the American Legion Association building at 310 5th street was to be sold and this seemed like an excellent place on which to start an organization for the youth of Huntingdon.
​
In June 1949, the associated clubs purchased the building and leased it to the community for $1.00 per year with the understanding that it was now the responsibility of the town to operate to the Huntingdon Community Center. In July 1949, Judge Fetterhoff signed non-profit status papers, and the first state officers were elected with Paul Oakman - roofing contractor (and Dr. Donald Oakman’s father) was elected president of a board comprised of representatives from all the local organizations.